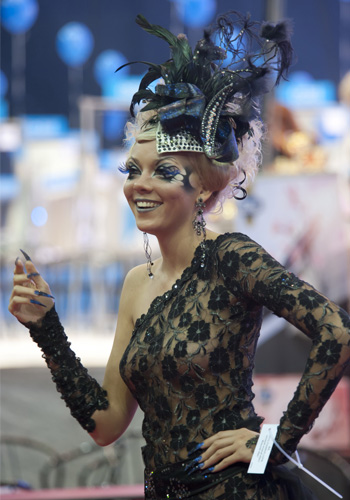 The International Festival «Nevskie Berega»,perhaps, is the most significant event in Russian Industry of Beauty. The Media Company «Kaknado» has already been the official video partner of this event for four times. During four days of the last Festival we were providing a total video support like this :

- the whole execution of the air broadcasting; The Festival’s live broadcast was identical to an air on a TV channel (graphic wallpapers, TV jingles, pack shots etc.);

- preparation of ten ads for the Festival’s air broadcasting;

- day-by-day video reports for daily uploading in the Internet;

- besides shooting and broadcasting from the main scene , during these four days we were also shooting two platforms, which were working non-stop at the same time: the stand of the Academy « Nevskie Berega » with hairstyle master classes and the nail design stand. Two cameras were working at each platform. All in all, eight cameras were used during the Festival.

- consultations and video maintenance of the stands – participants of the Festival;

The Media Company «Kaknado» will soon present the DVD-release based on the Festival. But it’ll be the next news!

The 18th September was the last day of the autumn Beauty Festival « Nevskie Berega ».

Four wonderful days full of amazing events in the world of Beauty will forever stay in memories of participants:

They were about 350 companies, which took part in the International exhibition, more than 2000 participants of a Championship  and also visitors of the Festival.

The main events during the Festival were:

Shows by leading companies and stylists ;

A branch of the competition «Russian beauty» in northwest.

It’s not a big secret that  « Nevskie Berega »  is one of the most popular, prestigious and bright event in  Beauty Industry.

During these four days representatives of the Industry were demonstrating the latest  opportunities and novelties to visitors.

"Nevskie Berega is the all-Russian exposition; we try to include much of the interesting and the useful in our program: more participants, more professionals and more guests. Thank everyone so much for participating!"

"On the first day our customers were mostly those, who bought our products for home usage. However, on the second and the third days there were lots of professionals. The customer flow is bigger on the February Expo, but still we are satisfied with the profit.

We are sure to participate again in the next expositions as the number of our students and sales grows after the event.

We have baan the partners of Nevskie Berega for seven years so that this year our exposition stand was the biggest.

We wish organizers to engage more specialists and never give up arranging Nevskie Berega traditionally in September and February!"

"We’ve got positive impressions from the Expo. Everything was rememberable, we liked the organization and the way they worked with us.

We were the primary sponsors of the Nevskie Berega and we’re undoubtedly are going to participate again.

"Actually, we couldn’t even leave the stand for a minute on those four days – so many were customers, business contacts and meetings. Isn’t that the best success marker of the Expo?

We’re so glad that the organizers quickly deal with technique, fix the problems. Thank them so much for the Expo!"

Galina Lobashova, head of the representative office of Plastech Ltd in St.Petersburg:

"We’re not for the first time in the Expo; we take part regularly two times a year. On the September Expo we arranged a competition as usually; our competitors had lots of impressions, lots of emotions. This year we also took part in the Nail Show.

All that we’d like to wish are growth, positive feelings and mood, more guests and further success!"

"The participation of our company in the Expo is always a cheerful, festive and unforgettable holiday. Moreover it’s a great opportunity find new business acquaintances and to attract new customers.

Thanks a lot for this perfect organization!"

"We’ve got the best impressions of the Expo: organizers cooperate perfectly well with the participants, lots of guests came to the exposition.

We’d like to wish thriving and creative work to the Nevskie Berega. All the best!"

"Nevskie Berega is like a sweet home to me. I am proud of this festival.

Thanks so much to the board of organizers, to Dmitry Ershov – such a great work had been done, many famous people had been invited. I’m wishing the festival to develop further, to invite more creative masters who would show us their interesting and great works.

"The heads of companies and the creative elite meet on the Festival to take a dive into the world of fashion, beauty, art and to discuss the tendencies of development of this elegant business.

The one of aims of the Beauty Festivals organized by the International Fund of Cosmetology, Hairdressing and Esthetics, is to find and support new talents, not only from big cities but from the provinces of our country as well. The Festival should help young talented people to get know in the world and to represent our country on the stages worldwide.

Let beauty get us all together!