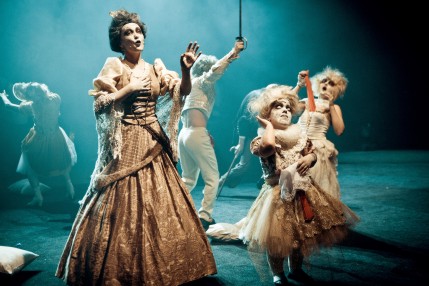 In the beginning of September in TYUZ Theater (Theater of Young Spectators), St. Petersburg, was presented a new autumn-winter hairstyle collection by Estel Professional. It was a grand show, a theatrical performance in which participated world-class models and actors of the best theatres of St. Petersburg. Such incredibly beautiful scenery was set on the stage where the mystical fashion play was performed. There was also a screen on which large-scale video installations and computer graphic was projected. The show was directed by the one of the greatest Russian fashion-shows directors Sergey Lukovcky, and the costumes were created by Andrey Rudakov, a fashion designer.

The characters of the Estel Boutique Bourjois express the main conception of the collection – eternal femininity, inaccessible sexuality. All the characters were full with enchantment and chic of the beginning of the XX century – Dyagilev’s Russian Seasons, Rachmaninov’s and Scryabin’s music works, Stravinsky’s ballets, Silver Age in Russian literature, modern as a style of art. The greatest impact on the fashion of those years had been made by L?on Bakst and Paul Poiret who rejected the established rules of their times and dared to introduce an absolutely new style of women’s clothing - stylistic eclecticism, color depth, styles, which placed emphasis on the natural beauty of human body, without any tight corselets. Those designers made a revolution in culture and outlook of people of that time; their works became a fundamental basis of all world fashion. You may still notice some features of those designers in modern fashion designers’ collections. Therefore, this entire cultural heritage inspired Estel Prodessional art-team to create Estel Boutique Bourjois. In this collection woman is represented as a piece of art, a special one. Estel Boutique’s woman is fascinating, well-educated, provocative and super fashionable.

Estel Boutique Bourjois is an attempt to make prose sing beautifully like a poem.

KAKNADO Media Company traditionally participated in the show. We prepared an ingenious video installation of 60 minutes. The performance was shot with 9 HD-cameras; we also used a hydraulic lift camera dolly. The second to-be-released film was shot backstage, and we are planning to present a DVD with bonus videos.

You may watch some parts of the video installation and the video from the Estel Boutique Bourjois show on our website, in the Portfolio section.